The climate change crisis demands of us a reevaluation of the connection between the local and the global. Meanwhile, the pandemic has given rise to a renaissance of mutual aid efforts around the globe. In India, response to laws targeting smaller farmers in favor of corporations ultimately brought about what may have been the largest general strike in the history of the world.

Ramparts: A Barricade Forum is currently seeking contributions for our next themed series, “Local Activism/Global Fascism”. We are interested in submissions–whether textual, visual, or multimedia–that address the connection between local issues and larger-scale authoritarianisms from a variety of angles. From detailed descriptions of how day-to-day activism has been affected by large structural forces to commentaries on unexpected international parallels, we’re excited to use our platform to highlight relationships of scale.

Send your submissions and pitches to submissions@barricadejournal.org. 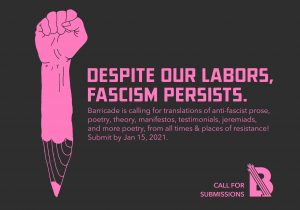 Despite our labors, fascism persists.

Although issue #4 is underway, Barricade is always accepting translations of anti-fascist prose, poetry, theory, manifestos, testimonials, jeremiads, and more poetry, from all times & places of resistance!

Your submission must include the following:

Please attach all of the above as a single document. Consult the style and formatting guide below.

Optional, but encouraged as appropriate:

All submissions are initially reviewed by members of the Barricade Editorial Collective, solely on the basis of the English translation and the accompanying translator’s statement. If the initial review determines the manuscript has merit and is potentially suitable for publication in Barricade, the manuscript is sent to an editorial team comprised of one member of the Collective and one Editor-At-Large (EAL) with expertise in the language and/or literature in which the original work was written.

As the name of the journal suggests, Barricade is anti-fascist not only in content but in method as well. We consider the editing process to be a conversation designed to clarify both the text and the translator’s unique approach to it. Our editors are committed above all to respecting a translator’s style and approach. The goals of the editing process are therefore: to confirm the linguistic accuracy of the translation, to clarify and shape the text to publication standard, to elucidate a translator’s method or philosophy and thereby expand our collective imagination of the multifarious praxes of translation, and to bring the manuscript into conformity with our style guide.

Submissions will receive confirmation of receipt and translators should expect to be notified whether their work has been selected for inclusion in an upcoming issue within a period of no longer than six weeks. The editing process should not exceed three months in total. The translator is expected to participate in the review of proof copies prior to publication. Since we accept submissions on a rolling basis, there is no guarantee that an accepted manuscript will appear in a particular issue, but all accepted manuscripts will be published.

In accordance with our Open Access and Non-Commercial policies, copyright of articles published in Barricade remain with the author. If an accepted piece is re-published elsewhere, we respectfully ask that its original publication in Barricade be acknowledged.

Authors will never be charged to submit, process, or publish a manuscript.

All published articles are licensed under a Creative Commons Attribution-NonCommercial-NoDerivatives 4.0 International License.